The photograph below appeared in the Summer Term 1951 issue of The Thorntonian.  Despite exhaustive enquiries, it has not been possible to trace the plaque, which may have been removed when the main building was demolished in 2003 to make way for the construction of the Lambeth Academy.

At the 2007 reunion, those present expressed a clear preference for having a replacement plaque in wood,  modelled as closely as possible on the layout and text of the original. OTs felt that an appropriate location would be the new Sixth Form Centre then under construction at  Lambeth College (which stands on the site formerly occupied by South Lodge); the College is also the custodian of the HTS pupil honours boards spanning the years 1918-68 inclusive.

A costed scheme was prepared and presented to the first AGM, held at The Windmill on 22 March 2008, when it was agreed that an appeal fund is launched. Subsequently, Richard Chambers, the then College Principal, confirmed that the Governors had agreed that the replacement plaque could be housed in the Centre.

At its meeting on 9 May 2008, the Management Committee approved the wording of the appeal letter, which was subsequently sent to all OTs with an entry on the database maintained by Ted Hayward.

Thanks to the number and value of donations received, the new plaque was ordered, and delivered in July 2008; it was displayed at the fourth reunion held on 20 September that year. It's shown in the second photograph below.

Ted Hayward has been able to trace, where applicable, the summary Service histories of most of the OTs concerned.  The current exceptions are:

Contact Ted if you'd like to have a copy of the schedule he has compiled and/or if you can provide any additional information (eg, first name(s)),which might help to identify more fully these remaining former pupils.  Searches of the database of WW2 civilian and military casualties held by the Commonwealth War Graves Commission have yielded no matches for them.   Note:  the original plaque omitted the name of JACKSON, D G, 1922-9, although it appears in the Roll of Honour list in one of the wartime magazines.  He has therefore been included as the 54th entry on the replacement plaque.

For ease of reference a transcription of the entries is given below. A copy of the original plaque is also displayed on the following website http://www.roll-of-honour.com/  Point the mouse at the "England N-Z" button and select "Surrey" from the resulting drop-down list. On the "Surrey" page select either the reference to "Clapham, Henry Thornton School" from the drop-down window labelled World War 1 & 2 - others selection or "Clapham Henry Thornton School, WW2"  listed below the Pre-1914-Memorial Selection section to find the Henry Thornton page. (The plaque entries on this website have been updated to show the additional information recently obtained on Service histories, as mentioned above.) The plaque is now on display at Lambeth College, with (immediately below it) the following descriptive plate:

The plaque is now on display at Lambeth College, with (immediately below it) the following descriptive plate:

November 2009: The plaque, at that date displayed (with its accompanying plate) in the ground-floor room of the Centre known as "the hub", was rededicated at a short service held at 2.30 pm on Saturday 31 October.  In addition to the Reverend Deborah Matthews, who officiated, attendance included:  20 OTs and Peter Wright, nephew of Leslie Robert ("Bobby") Wright, one of the pupils commemorated on the plaque; other relatives or friends of OTs present;  the Mayors of Lambeth and Wandsworth (the school was located in the latter borough until the 1965 London local government re-organisation); Richard Chambers, College Principal; Keith Hill, the local Member of Parliament; and representatives of the Royal British Legion and The Clapham Society.
Copies of the programme and Order of Service are reproduced below, with selected photographs taken by Phil Wareham, the College photographer.  Brief captions appear below them.
Apart from Peter Wright (as mentioned above) the Association has to date been unable to trace any surviving relatives. August 2012 update:  Ken Jamieson, younger brother of AD (Don) Jamieson and an OT himself (1934-9),has been able to provide further information about his family, including several photos (now added to the Pupils gallery).

October 2012 Update:  Dr Jack Allwright advises that his uncle, Charles John Allwright, a pupil from 1927 until probably 1931, was killed in action in November 1944 while serving with the First Battalion, The Middlesex Regiment; he is buried in the War Graves Cemetery in Faenza.  There are two surviving sons.  Unfortunately Charles's name was not included on the original memorial, nor therefore on the rededicated tablet.  Ted Hayward has been unable to ascertain how this omission occurred but on behalf of the Association is pleased to be able to record, in this way, the additional entry for Charles.   Dr Allwright has kindly supplied a 1944 press cutting and a school reference for his uncle, which are reproduced in the Pupils gallery.

September 2020:   the plaque, with other school-related memorabilia also stored at Lambeth College (including the pupil honours boards for 1951-68),is now permanently displayed on the ground floor of  the Henry Thornton building, at the rear of the  College site. 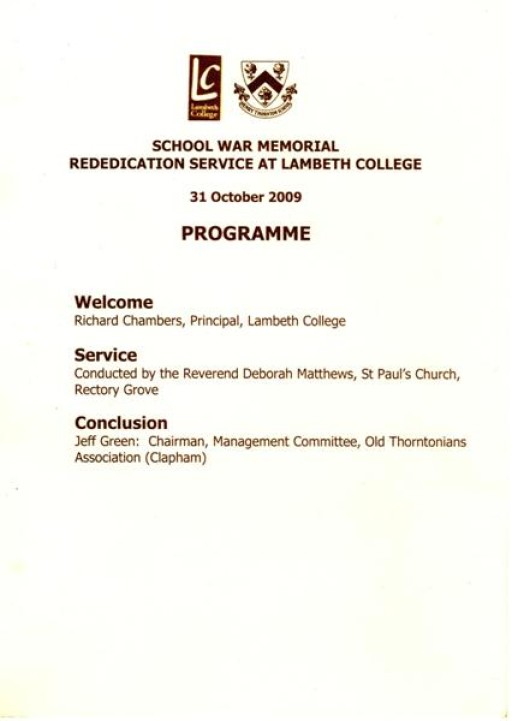 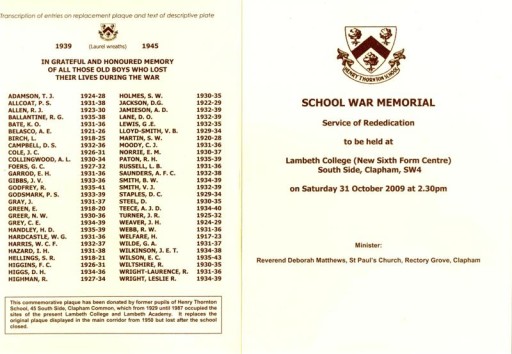 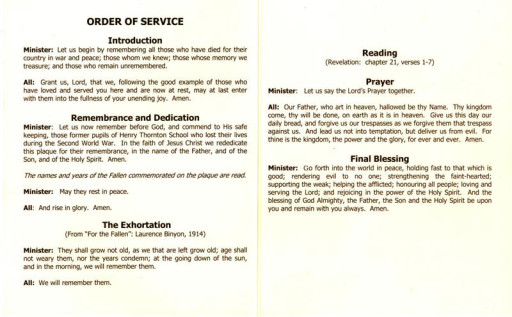 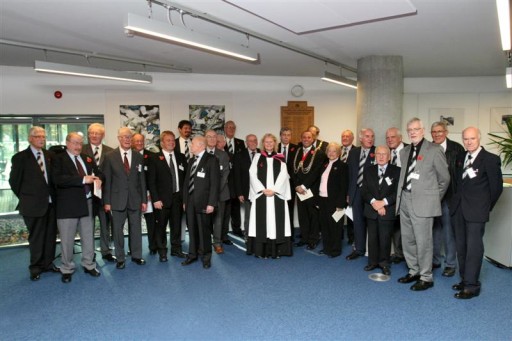 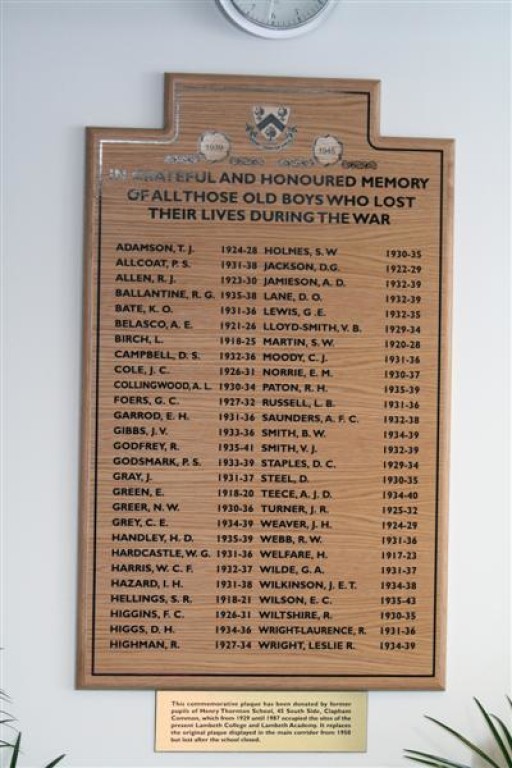 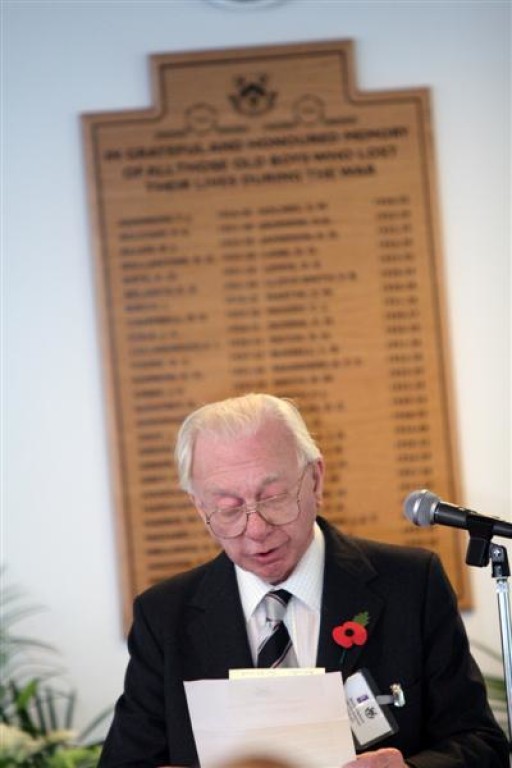 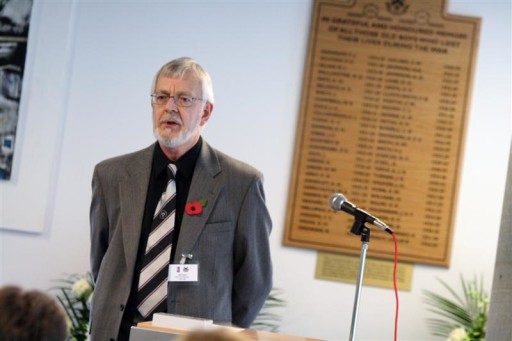 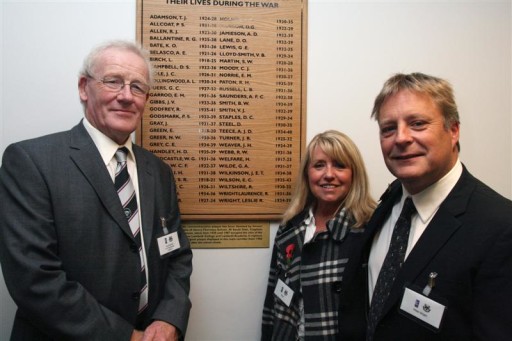 a. OTs with the Reverend Deborah Matthews, the Mayors of Lambeth and Wandsworth, and Keith Hill, the local Member of Parliament

b. the rededicated plaque, with a descriptive plate below

e. Ted Hayward (1950-7),Association Secretary, with Peter Wright and his wife Ruth (Peter is the nephew of Leslie Robert ("Bobby") Wright, whose name appears as the last entry on the plaque; he is also an OT himself, having attended the school in the 1970s)

A short report, reproduced below, appeared in the South London Press.

A short report, reproduced below, appeared in the South London Press.

Ken Jamieson (1934-9) has supplied a copy, reproduced below, of the original memorial service held at the school on 19 December 1950: Ken Jamieson (1934-9) has supplied a copy, reproduced below, of the original memorial service held at the school on 19 December 1950: