This page will be of particular interest to those OTs who were at the school during the early part of 1939.

On 31 March and 1 April that year HTS hosted an exhibition described, in the 40-page brochure, as "Industrial: Educational: Commercial".  The event ran from 2.30 until 10.30 pm each day and featured a wide range of activities and themes, including:

Selected extracts from the brochure are given below, preceded by the Foreword written by the Head Master.

"Of all the pretty suburbs that still adorn our Metropolis," wrote Thackeray, "there are few that exceed in charm Clapham Common."

These words read strangely to-day, when that same Common, which in Lord Macaulay's time was a "delightful wilderness of gorse bushes and poplar groves, and gravel pits, and ponds great and small," is now shaven and shorn, its wildness tamed, and its hills and valleys ironed out into dull uniformity.

Clapham, once a centre of spiritual and intellectual life that influenced England at a critical time in her history, once so clearly a community with a soul, is now in danger of being swallowed up by the great mechanical maw of London, and of becoming a mere geographical division of that sprawling monster.

It is the object of the organisers of this Exhibition to bring to the consciousness of the people of Clapham a picture of the Clapham in which they live.  Here you will see a concrete reminder of the industries carried on, and the educational work done, in the Clapham of to-day.  There will be talks on Clapham as it was in early times, and in its great days, and as it is now.

And why should its greatest days not be the days to come?  The generation now growing up in Clapham's old streets, and playing on the historic Common, is no whit inferior to the past in body or mind.  But we have here the same problem as men are faced with everywhere, "What shall it profit a man if he shall gain the whole world and lose his own soul?"  In modern terms, can man's soul survive in a world of machinery?  Can we regain that sense of community, which is all but lost?

We know how in some countries it is sought to revive this sense of community by artificial means, by a vast mechanical organisation of propaganda.  That is not the British way.  We want spontaneity from below, not pressure from above.  And the community sense, if it is to be real, must spread from local centres, such as this Clapham of ours.

That our Exhibition may do something to make Clapham people conscious of their heritage and their opportunities is our earnest hope.

Extracts from the Clapham Exhibition brochure: 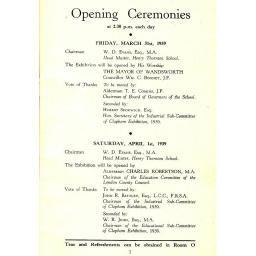 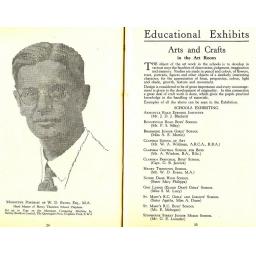 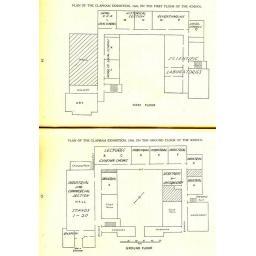